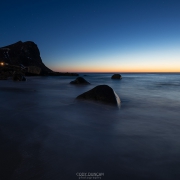 With a perfectly clear sky on Wednesday I wandered down to the beach just before midnight to see if I might get lucky with one last aurora. Last year, April 13th was my last one, this year, it will be the image from last week’s post (Friday Photo #327) on April 10th. Now it’s a 4 months wait until late august when I’ll look to the night sky again. Until then, we have the season of light!

With each passing night, the sunsets and sunrises with move further and further north and the horizon glows brighter and brighter until one night in late May, the sun no longer sets – and the season of the midnight sun is here – though due to Summer Time it’s really the 01:00 sun when it reaches its lowest point in the sky.

The snow has been melting quickly this last week and today it is even 10˚C outside, though with a misty rain. Yesterday I even saw the first dandelion flowers down at the beach, so it feels like spring is off to an early start – but that still doesn’t mean that the winds can’t shift and winter will make a return.