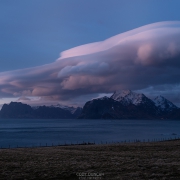 Spring has arrived in the last week here on Lofoten – even up to 15˚ C in the last few days! That might not sound like much to anyone down south, but for me, it’s the warmest temperature I’ve had since September! I can even go on my evening jogs in shorts and a t-shirt at the moment. How long it will last, nobody knows. But at least it is a taste of summer for us! And a nice July day might not be much warmer than 15˚ C here anyhow.

Spring is a tricky time of year here on Lofoten. The light of summer but often the cold of winter. Though in sun and warmth and sun of the last week I can see the fields outside my house growing greener by the day. Which is quite a difference to last year when there was much more snow, especially on the mountains. It will probably snow again, perhaps several times, but at least the thermometer seems to be moving north.

Usually spring is a slightly unproductive photographic time for me. As I don’t really like the brown landscapes all that much. But this year, I will probably make much more effort to go out and photograph and to illustrate what spring is, as hopefully later in the year I’ll produce the final missing sections of my ’Seasons on Lofoten’ ebook guides – spring and autumn. Which I will likely combine together into one guide, as they are otherwise relatively short periods on their own. First though, I’m putting in long hours for the long overdue 2nd edition of Seasons on Lofoten – Summer, which should be out next week hopefully!

I was hoping to be lazy on this rainy evening. The sunset was interesting, but not enough to get me out of the house. Finally though, a little while later all the low clouds passed and I was this glowing lenticular cloud floating over Himmeltindan. It is not often we get lenticular clouds here, so I quickly grabbed my camera and rain out into the bog of my neighbors field. It was windy – the whole reason the cloud was there – but warm. So between gusts, I managed a few images in the quickly fading twilight.