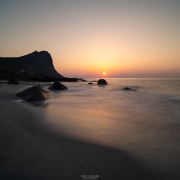 When I wrote it last weeks Friday Photo (#329) that it had been warm for several days, it turned into a weekend of t-shirt weather, not a cloud to be seen and barely a hint of wind. The weather was actually too good for photography!

However, it as not just the normal hazy blue sky that sometimes occurs in summer, instead it was caused by sand from the Sahara desert drifting over Lofoten. And so over several nights, despite the cloudless sky, we were given orage and red skies, something that I’m more used to at home in California.

In the sun and warmth I could see the fields outside my house growing greener by the day, at the trees in my yard have already begun to bud. A few weeks earlier than normal this year.

But Lofoten being Lofoten, the summer days are over and a cold north wind with passing snow flurries has been sweeping over the islands over the last days. Summer has been put on pause for the time being. But actually, this is the more normal weather for this time of year and snow is a fairly regular occurrence until the end of the month. So it will be a little while longer before I can put the jackets away…