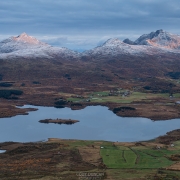 Winter is coming. Well, kinda… Lofoten had already received its first autumn snow while I was over hiking in Sweden in mid September – more on that later, but if you follow me on Instagram, then you know what I’ve been up to this summer and autumn. But as is usual with most years, waves of warm and cold cycle across the islands as autumn passes into early winter – until one day I’ll wake up and the outside world is white.

Last Friday I went for an evening hike. I was actually supposed to have hiked the mountain in the left of this image, Blåtind. But as I arrived at the parking area in Slydalen, I was in a complete white out of heavy snow. I knew it would eventually pass, but as it was a north wind, I figured it might get caught on the mountains for a while. So I decided to head to the other side of Vestvågøy to where the weather seemed a bit clearer and take an easy hike to Eltofttuva instead.

The mountains to the south remained mostly under the clouds during my ascent, but eventually the clouds cleared, leaving a nice dusting of white down to around 300m – The lowest I’ve seen the snow so far this season. Eventually the sun even emerged on the mountains for a little while before the next wave of snow arrived and I descended from Eltofttuva in snow and then rain.

By the next day the snow was gone. And a few days ago I was on the summit of Blåtind in the cold autumn sun. No remaining snow, unfortunately.