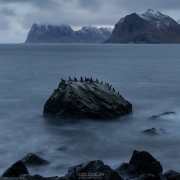 A cold wind has been blowing for the last days and the snow line has been dancing up and down the mountains. On Tuesday we actually had our first ‘sea to summit’ snow of the season here in west Lofoten with a nice dusting on the beaches. Though as is normal this time of year it didn’t last long and was melted away in the next days rain. But over, the weather people say that Norway has had a slightly colder than average October this year, 2.0 degrees below average for Leknes.

Skarvstein – or cormorant rock as I like to call it, is one of the sights along my drive to town. The birds are nearly always there, just sitting. Occasionally the local sea eagle will hang out there as well.

I wasn’t actually sure what to post today as the week has been completely occupied by the update of my Kungsleden South ebook. But passing the rock today on the way back from the supermarket, it looked to be a fitting representation for the last week’s weather. While October can be a month of transition as autumn passes, November feels like we’re just waiting for the darkness of the polar night to arrive. On these heavy, overcast days it is just gloomy and dreary – the sun now too low in the sky to even shine though any breaks in the clouds here on the northern side of the islands – those on the south have a bit more luck with the light.

The sea was a little rough today, so I put on a 6 stop ND filter to go down to a 25 second exposure. Luckily the birds mostly sit still. I would have maybe gone for a longer exposure, would have looked nice for the clouds, but I was too lazy to stand around holding my cable release.

I cropped to 4:5 because there’s an annoying large rock just out of frame to the left which makes the composition feel unbalanced, so I didn’t want it in the shot – though ideally I would have liked to have shot the scene a little wider were it not there.