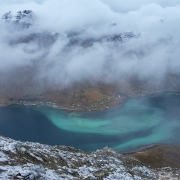 The snow comes and the snow goes. It’s the last Friday in October and that time of year on Lofoten where we begin the long, slow wait for winter. I think it’s safe to say that autumn is gone by now, along with the leaves from nearly all the trees. The first ‘autumn storm’ swept over the coast of northern Norway earlier in the week – though pretty late in the year for the first proper storm – and the snow seems to creep a little lower down the mountains more regularly.

In just over 6 weeks the polar night will begin and our days here at the moment are already shorter than most people in Europe experience even at mid winter. And with a loss of nearly 1 hour of daylight per week, we need to head out hiking a little earlier each day, not to get caught out in too much darkness.

But of course, the weather here is as unpredictable as always. And while the temperature is generally on a downhill trend, it tends to fluctuate in cycles, so we never know when we’ll get the first day of summit to sea snow turning the islands white. At this time of year though, I generally prefer a bit of snow to be falling while I’m in the mountains than a cold 2-3˚C rain. That is miserable!

Hopefully there is still a bit more time in the hiking season – I don’t like to push things too far into snowy hikes/photos for the guides. I’m still mostly focusing on west Lofoten and before next year’s hiking season I’ll have a good sized update for the West Lofoten Hikes Ebook. But those of you who follow me on Instagram know that I’ve also spent a lot of time over in Sweden this summer and autumn. The results of one of those trips is getting the final edits and should be out next week. The other project I’ll announce a bit later, as I’m also planning a long overdue Seasons on Lofoten: Spring and Autumn guide for Lofoten, so not sure which one will get priority – and I doubt I can finish both before my winter guiding season begins. Either way, I’ll be spending a lot of time at the keyboard over the next months!