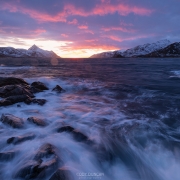 Despite being fully cloudy over all of northern Lofoten for as far as I could see from home, the strong southern near-gale of the day led me to believe that there would maybe be a chance of clear sky visible from the southern side. So I threw my camera bag in my van as I headed to Leknes in the late morning. As I drove along Nappstraumen and could see the clear southern horizon over the Vestfjord, with heavy clouds over Lofoten, hmm, something interesting might happen…

After finishing my errands and getting a coffee to go, I could see the sky was already lighting up just before noon. If it had been a purely photographic day, then I would have already been in place somewhere – As my location in the center of Leknes, and needing to get somewhere with a open view towards the south meant I was at least 20-30 minutes from most places. The quickest location, though not ideal, would be to park near Skreda, with views over Nappstraumen.

The sky was even brighter when I arrived 10 minutes later. And the wind was blowing! I immediately headed out to one of the rock outcroppings – I was also wearing my rubber boots – but I could see the water was coming in quickly. A quick check to the tides and yep, high tide was in about an hour. So I didn’t want to hang out there too long!

In the crazy winds, it took me a bit of wandering along the shoreline before I found an interesting enough foreground, and a place were I wasn’t getting completely soaked in crashing waves and spray – though as you can see in the photo, I bit of water got me.

It took me a while before I eventually arrived at this final location, though still not entirely happy with the composition – and by now the sky was beginning to fade a bit. And while I have many photos with more color in the sky – also due to shooting a tighter composition, I think this image works a little nicer. I actually found a final composition that I liked even more, but by then too much of the sky had faded.

Now, this image could just be a normal sunset anywhere in the world. The difference here being that I’m facing almost 180˚ south, and it’s 12:39 in the afternoon. The sun remained below the horizon the entire time, Yet just high enough for about an hour of sunrise – sunset color in the clouds. And in only 6 months time, I’ll have to be looking the opposite direction, face due north, to watch the midnight sun gently floating above the sea…