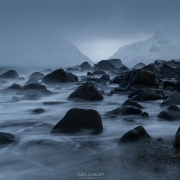 It has been a grey winter this year. So far, half way into February, I’ve seen the sun four times. Ikke bra! (as one would say in Norwegian). I’ve maybe missed it a couple other times as when not guiding I’m almost entirely stuck behind the computer trying to get the 4th edition of Seasons On Lofoten – Winter ebook finally published. But anything I missed would have only been short moments of light between the seemingly ever preset clouds of 2020.

This week will be a short post. All my brain power is on book editing and design. Frankly, I’m exhausted. What was just meant to be a small updated to some info turned into an additional 130+ pages and images for a new detailed destination guide section in what is basically an entirely new ebook. And, since I’m not the best businessperson in the world, all this work will be a free update for anyone who’s bought the previous editions, even going back to first edition for $5 in 2015 – The new version will be $18, just FYI. This project has been a burden on me since Christmas, so I’m looking for it to be finished soon! Hopefully by this weekend – something I’ve said since mid January…

And yet, as much as I want to be finished, I want it to be good. So even yesterday and today I’ve been out photographing a couple locations to be included in the destination guide, having had to wait for the right conditions – which this year means, ‘not rain.’

This image is one of the new photos from yesterday, taken on a quiet section of Flakstadøy. To find out more, you’ll have to get the 4th edition of the ebook. 🙂