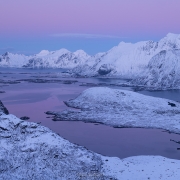 This image is a prologue to last week’s post: Friday Photo #372.

There is always a bit of a balance of how much waiting around one wants to do if heading out to the mountains for northern lights without camping. Do you go up early, shoot sunset, and then wait around some undetermined amount of time in the cold and dark for the aurora to show up later in the evening. Or do you just head up sometime after dark – assuming you know the route, and give yourself a shorter wait.

On this day I did a bit of both. It was the first clear and calm day I can remember so far this winter. I hadn’t quite decided where I was going when I left my house in the late afternoon, only that it would be something around the Fredvang area. As I crossed the twin bridges, the mountains of Flakstad were glowing in the warm afternoon light. As I continued into Selfjord there were multiple places I would have liked to stop, as the reflections were perfect! But I had no time, unfortunately.

As I pulled into the parking area for my hike, I kicked myself for not leaving even 30 minutes earlier. And I had actually planned to leave a little later, but finished my projects for the day ahead of schedule. As I put on my crampons I headed up the flat ridgeline through the snow, racing the last sunlight quickly disappearing from the distant mountain peaks. I was too late.

Soon though, a cold winter twilight began to take over the landscape. I knew I would have a decent viewpoint a little higher up the ridge, so now it became another race. Would the twilight last long enough for me to arrive? Luckily it did! And the result is that I did not come away from the evening completely empty handed – waiting for northern lights that never appeared…