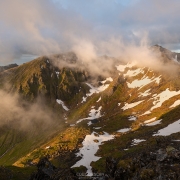 After several days of misty grey clouds and wind the sky was finally filled with nice puffy white clouds yesterday. Actually one of the nicer looking days (photographically) in weeks, as it has either been fully blue sky, or fully grey; not much in between. Though it my preference for hiking at night still under the midnight sun, perhaps I waited a little too long.

Sometimes the hardest part about hiking on Lofoten is actually choosing where you want to go. Even more so when you’re trying to be produce and choose somewhere with the best chances of getting some decent photos. I can always choose the old reliable classics, but as I’m still attempting to work on a new hiking guide this summer – whether that ever happens is still to be decided, mostly because I can’t afford to be driving in circles every day while I’m essentially unemployed thanks to Corona – I’m at least trying to choose some areas which I haven’t visited in a while. Last night that was Kleivheia, a rarely visited peak on the north side of Unstad.

The hiking isn’t very fun for the ascent of the steep, grassy gully – and even worse for the descent. And so as I saw heavy grey clouds blocking out the sun before I was even half way up, I thought about just turning around. Luckily I had a good podcast in my earphones and really, what else was I going to do otherwise? Not much. So I continued.

I came up there originally hoping to get nice golden light shining across Unstad bay and village. But that was just grey. I continued to the other side of the ridge, where there was some nice light over the Eggum side of the coastline, but it’s not the best composition in the world. So I just continued on towards the top.

I could see the next wave of clouds approaching and felt the first drops of rain. A rainbow appeared to might right, but I wasn’t in a good location. But it was one of those nice moments as a photographer when the light is moving fast and you’re racing to get into position – somewhere! Anywhere!

After the rain passed and the sun emerged again the valley between me and Skrådalstind began to fill with a swirling mist. Again, running from my previous composition I tried to get somewhere with at least a decent composition. But all the elements were moving so quickly that there wasn’t really time to fine tune a composition and within a few minutes the mist concealed the summit and the moment was lost. But it was worth the effort.