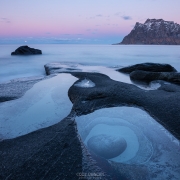 The new year has arrived with the soft pastels of winter twilight. Cold and clear, perfect weather for the first day of 2021 and a slightly slow start. Feeling lazy, I headed for a Lofoten classic, the Eye of Uttakleiv.

Lots of locals were out and about enjoying the weather, but at will likely be the trend for most of the winter and probably the first half of the year, no other photographers were around. Though had I not been lazy, I should have probably used the nice weather to head up a mountain. But there are still 4 months of winter left, so plenty of time for that in the days and weeks ahead.

You can see in the photo that the snow is still quite thin on Lofoten. It’s nice for driving, having the roads clear and mostly dry. But for photography, a little more white in the mountains would be nice! Soon hopefully.

The moon has been shining bright the last days, though in this photo it’s just a small spot above the rock on the left. It would have gone blurry from the 30 second exposure anyhow. I used a dark polarizer filter to actually bring out the reflection in the foreground water to add contrast against the dark rocks – though this did slightly make the ‘eye’ less visible, I liked the overall feel of the image better this way.