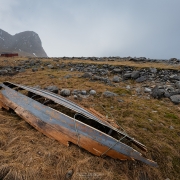 After a mostly calm winter, two back-to-back storms swept over Lofoten on Tuesday and Wednesday, with the 2nd one brining hurricane force winds to the islands. Wednesday was the first time this winter I saw 30+ meter/second wind gusts on my weather station, and in Stamsund wind was recoded at over 40 m/s (for note: over 33 m/s is hurricane force wind). While intense, luckily the storm seemed to pass by quickly, with the strong winds only lasting 8 hours or so. But that was enough to bring structural damage across the islands.

One of the losses was one of the red boat houses on the left side of the beach at Unstad, which you can see in the left background of the photo. It is strange to think of how many long winters and storms the buildings have witnessed, and then one day, it has been one storm too many. I guess that is one reason there aren’t too many old, or historic buildings around Lofoten, they just don’t last that long in the weather out here.

I had been sitting on the beach at Unstad on Thursday morning, a completely calm day compared to the previous 24 hours. It was actually the first day I have sat outside this year and noticed the warmth from the sun heating up my back as I watched the still slightly stormy waves in front of me. Sitting there, I noticed an unusually large amount of pained red wood broken apart across the rocks at the upper tide line. Usually storms bring in a lot of debris to the beaches, but this wood looked a little too clean to have been out at sea very long. Then, looking to the left, I noticed a few people walking around the boat houses, picking stuff up.

The old row boat here was lying a little ways away, just next to the road. I’m not sure if it had been blown here, or moved up from further down on the rocks. Either way, it is a piece of Lofoten history now lost to the storms.