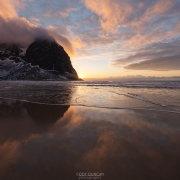 Tomorrow, March 20th, is the vernal equinox and the sun will pass north of the equator for the first time since September – spring and summer are on the way! Even the first of the migratory birds have started to find their places along the beaches and coastline of Lofoten, and the evenings are finally feeling a little lighter after the long dark months of winter.

From a photographic point of view, this means the sun is finally leaving the southern part of the sky and reaching into more northern facing locations. Today’s photo, of the setting sun at Kvalvika beach from last Sunday would not have been possible just 2 weeks ago, as the sun would have set just behind the mountain and not been visible from the beach. Over the coming weeks, the setting sun will move further the the right (north) of this scene until it reaches true north in late May – the beginning of the midnight sun season here on Lofoten.

As the sun rises and sets further to the north, more and more locations on Lofoten will emerge from the long shadows of winter. Especially important for this are the beaches, most of which are on the northern sides of the islands and surrounded by steep mountains.

Last Sunday, I decided to head to Kvalvika with a pair of journalism students who are including me in one of their university projects. Knowing it was one of the first days with the setting sun on the beach, it seemed like a pretty good option. Although leaving the parking lot for the short 1 hour hike, it was one of those days where the weather forecast was more optimistic than reality, as heavy clouds cloaked most of Lofoten. Arriving at the beach in mid afternoon I could see some small areas of clear sky along the lower horizon. I gave it a 50/50 chance of seeing a sunset vs. having a grey set.

Time seemed to pass slowly, and even the surrounding mountains where not receiving any light and with the sun behind the mountain Kjerringa, I couldn’t see what was going to happen, we could only wait. But finally, I could see the steep cliffs of Ryten begin to lighten, and then glow bright in direct light! As the minutes passed the sunlight moved towards us, eventually shining across the northern half of the beach. Luck was on our side.

Friday Photo #429 – After The Storm
Scroll to top