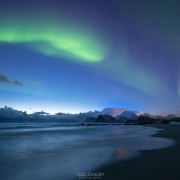 It is mid April and the northern horizon is growing lighter with each passing night as the sun continues on it’s northern journey over the next two months. And so, it is time to say goodbye to the northern lights until they return again in late August.

Every year it is always a question of when I will see the last aurora, doing it’s best to shine brighter than the midnight April sky. So far, the night of April 12/13 is the latest I have photographed northern lights here on Lofoten. Today’s image is also of that night. It won’t be until next week when the sky will definitely be too bright, that I will know if this was this years last aurora image or not.

However, the weather forecast is showing clear skies this weekend and there is also some solar energy hitting earth, which means there is a good change I might get one or two more nights of northern lights in the coming nights. And it really is a light night event at this time of year, usually becoming visible around midnight.

While the northern lights often get stereotyped as a winter event, from the Lofoten Islands, and in a strictly astrological sense of light and darkness, they are potentially visible for about 8 months of the year – about August 20-25 – April 15-20. So about 2/3rds of the year they are visible! I guess that is why I always lose a bit of motivation during the last month or so and don’t put too much effort to get out unless conditions seem ideal. The exception being, to try and get the last aurora dance of the season.

This year was a strange northern lights season, and defiantly not the best of the 5 winters I have now lived full time on Lofoten. It was much better than the 2019/2020 season, which simply had terrible weather overall. This season we had a pretty rainy and gray start to the season and it wasn’t until January that the weather improved somewhat. And while we were lucky to have some large aurora displays on a few perfectly clear nights, they were still somewhat few and far between. And frustratingly, there were also multiple clear but aurora-less nights this season. I guess that is why northern lights photography is usually referred to as, ‘chasing’ or ‘hunting,’ or some other verb to describe the pursuit – as even in otherwise perfect conditions, you never know if they will show up or not…