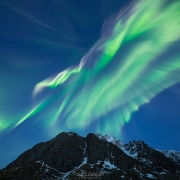 My prediction for the weekend in last weeks post (Friday Photo #432) of maybe 1-2 more last nights of northern lights of the season more than came true, turning into 4 consecutive nights of aurora from Friday to Monday. The best display by far though, was Friday night and into the early morning hours of Saturday, with multiple KP5 coronas appearing well into the southern half of the sky.

I’m posting multiple photos this week, as these will be the last northern lights photos I’ll have until the sky begins to darken again in late August. But this was a good finish to the year, and now the latest I have taken northern lights images into April, with the last night being Monday/Tuesday the 19/20th – where previously it had been the night of 13/14th. So almost a week later this year.

Really though, it is just pure luck after the beginning of April, as it needs to be a large enough aurora display to appear overhead or in the southern sky which remains dark enough. Any small northerner lights along the northern horizon would not likely have been visible. But I think there is something unique and special about these spring auroras, with the horizon glowing which adds depths and color to the image.

The second image, taken just after midnight on Sunday night/Monday morning might be my favorite of this group. Too bad I hadn’t been in Reine on Friday, that would have been a show! But I kind of like the subtlety of this image, with the aurora almost interacting with the moon, which itself was also nicely situated over the landscape. Normally I try and avoid including city lights in my aurora photos, but here, I think they add to the sense of place to the image. The aurora didn’t last long this night, but eventually some really cool lenticular clouds began floating over the fjord (you can see a time lapse of if you follow me on Instagram) which eventually took over my attention – Perhaps only a photographer living on Lofoten can be more interested in clouds than northern lights!