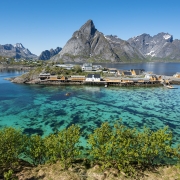 Lofoten is off to a fantastic start to June this year, already with temperatures between 19-21˚C since the start of the month (its only June 4th as I write this, so who knows if the trend will continue.). One needs to go back to 2017 or 2014 for the last time Lofoten had similar temperatures in early June. Otherwise, the average temperature during this time of year is around 8˚C, so not particularly warm.

Normally at this time of year I’m pretty much fully transitioned into ‘Midnight sun’ time, but the occasional day sees me out of the house before noon. On Wednesday I was doing some filming for a friend and found myself in west Lofoten, enjoying the year’s first cinnamon roll at Anita’s Sjømat in the early afternoon. Before heading back I took a quick walk up the small hill overlooking the yellow rorbu cabins at Sakrisøy. Despite a ‘boring’ blue sky, This is what a perfect feeling day in early summer on Lofoten looks like: Azure water, fresh green trees, blue sky, a bit of mountain snow… Paradise. It is days like this that make the months of darkness and bad weather over the winter worth being up here. And even more so because the weather can shift at any time – so we need to enjoy it while we can!

For the island landscape itself though, it will still be a few more weeks until it is finally in its summer appearance. The coastal farm fields have been green and filling with various flowers for several weeks now. However, the wild grasslands and landscapes are still somewhat brown, as the fresh green hasn’t grown tall enough yet. You can see so in the grasses in the very bottom of the image. So it will still be a few more weeks until the wild areas of Lofoten are full of knee high grass and flowers – that is when summer really arrives for me and camping season begins. Although for the farm fields, they will be cut by the farmers for winter feed some time in the first week or so of July – so there is kinda only 2-3 weeks where all of Lofoten’s landscape is filled with grass and wildflowers.

What weather the rest of summer will bring is anyones guess. But for the few tourists and us locals that have been here during the last week, it is about as good as it gets!