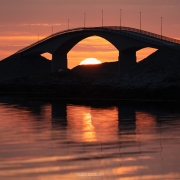 The Lofoten Islands are now two weeks into summer’s midnight sun season – and still more than a month away until the sun will touch the sea on the northern horizon again in mid July. Some years it feels like a long wait until summer. This year we have been lucky, with fantastic conditions for weeks! Though now it will be raining for several days – though looking at my semi-brown lawn, I guess we need it!

A late night message of orcas near Hamnøy saw me driving west from home at 22:00. I caught a brief glimpse of them outside of Sakrisøy, but they were moving fast toward the west – and road closure near Reine to widen the narrow causeway that has caused traffic problems for years was underway, so I couldn’t continue to follow them.

But it was a nice May evening as I made my way back home. Crossing Kåkersund bridge, which connects Moskenesøy and Flakstadøy I saw the sun shining over the straight to the north and almost stopped to try and take a photo, but decided on continuing on. Eventually as I made my way along the narrow, winding road of Flakstadøy I could see the sun again, low on the horizon to the north. As I continued and the bridges came into sight, I thought there might be a possibility for an interesting photo.

Luckily, there was a fish factory that I could park in which had the sun almost perfectly aligned under the bridge. In a hurry, I first shot from near where I parked, but the composition wasn’t as interesting, but the sun at that moment had been higher in the sky. As the sun moved eastwards, I had to move to center it under the bridge again. But in only these 5-10 minutes, it had also dropped in elevation.

I now know the timing I need to be there for, so I think I will go back one of these days and try to make a better version of this image with the sun centered directly under the bridge. It seems like it could be a cool and unique image.