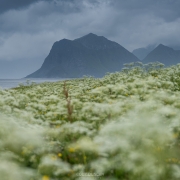 After June’s fantastic start this year, the weather has unfortunately returned to more normal conditions for early summer, with temperatures in the low teens over the last weeks and frequent passing rain showers or overcast skies. Well, Lofoten fared better than the Helgeland coast, where I spent a week in almost non-stop rain – the benefit of Lofoten being out in the sea is that the weather passes quicker, and doesn’t get ‘stuck’ over the islands as long. Although this isn’t always a positive.

But the rain is also what turns the landscape green and fills the fields, meadows, and hillsides with an assortment of wildflowers. Right now, at the end of June and into the first weeks of July is when Lofoten is at its peak of summer color – or what otherwise might be considered spring in more moderate latitudes of the world. This is the time of year I’ve finally been waiting for after the long thaw out from winter. Finally Lofoten has blossomed.

Soon however, during the first week of July, many of the coastal meadows, which are actually farm fields, will be mowed for winter feed for the farmers’ sheep and cows. This scene however, will survive the cutting, but eventually the flowers will seed and disappear. The grass here will still grow wild throughout the summer, waiting until the sheep are brought down from the mountains in autumn, and kept here for a while until they are returned to their barns for winter. Or in the case of the lambs, a less pleasant fate.