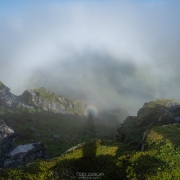 In a case of Lofoten’s unreliable weather forecasting, the planned 6-peaks crossing of Flakstadøy that a friend and I had for last Saturday when the forecasted sun arrived in the morning as low, heavy clouds. What we didn’t know, based on our locations, was that the cloud burn-off had already begun from the southern side of Lofoten, resulting in blue sky for most of the island – except my valley of course!

As time passed, my friend headed up into the mountains from Nappskaret, I decided to join from my side and we met in the mountain pass below Stornappstind and Middagstind. What had been a warm and sunny day as I walked out my door turned into a moderate north wind as I reached the pass. Then we both began our way up higher to Jofinnskaret.

Strange things can happen over the mountains in a north wind. And on this moderately warm day, condensation clouds were forming over all the first mountain peaks on the northern side of the islands, resulting in zero visibility. We chose to head to Okstind, which, as far as we could see, was in and out of the clouds as they blew across from Middagstind.

Reaching the summit, we had fully blue sky to the south. While clouds raced in from the north. Half of Stornappstind was visible, while the other half was covered in white. Middagstind was nowhere to be seen. Okstind, was just on the border of clouds and blue, in and out of the mist every few moments for quite dramatic conditions (for the middle of the afternoon).

With the sun high overhead, A Brocken spectre appeared every time the clouds enveloped the summit. Not something I see very often here on Lofoten and worth a windy day in the mountains to experience.