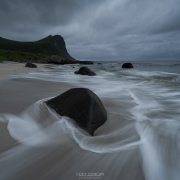 Summer seems to have vanished over the last week from Lofoten (and the rest of northern Norway). Starting with a ferry canceling storm last Thursday, the wind, rain, clouds, and cold temperatures have remained, with the thermostat barely reaching 10˚C most days this week. I’ve commented to friends that it already feels like autumn.

But it is still only July, and the weather will improve again – forecasted to the mid 20’s˚C for next week in much of northern Norway. But this last week has been pretty rough, and defiantly not summer-like. Beginning with last weeks storm, many motorhome tourists fled Lofoten, causing hours long waiting times at the ferries, until they too were canceled due to the weather. After a week of near constant rain and wind and cold, Lofoten is actually feeling pretty empty for what should otherwise be the height of the summer tourism season. But if I was traveling around Norway, I wouldn’t want to be on Lofoten during the past week either, when I can see it is nice and sunny down in the fjords.

Overall, I think this will probably end up as a below average summer in terms of temperatures (low) and rain (high). Last year we seemed to have endless sunsets every night in July and into early August. This year, I haven’t seen the midnight sun in a week – and by now it is already setting below the horizon. Midnight sun season is over for this year, and I never really got to enjoy the end of it, unfortunately. Though for being outdoors and camping, there still won’t be proper night until later in August. And as of today, it is one month until the northern lights become visible again over Lofoten, so there will be a different reason to stay up late into the night.

This weeks photo is just a simple wave photo from down on the beach. About as far as I got in the last days between the rain showers. I was actually hoping for a more dramatic photo for this weeks post to better reflect the conditions, but the light has actually been quite bad, with flat, grey, and contrast-less clouds concealing the landscape behind a wall of misty rain. So even though its been stormy, it doesn’t look so…