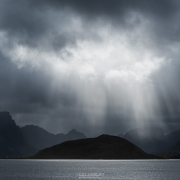 There generally always seems to be a north – south divide with the weather in Norway. When the media reports Norway is having a good summer, this can be translated to, ‘Oslo and the southern coast of Norway is having a good summer.’ This year the opposite weather effect seems to have been particularly strong, as Oslo has now having set a new record for the most summer days from June to August – 79 days over 20˚c this year. The previous record was from 2006 with 78 days.

Moving north to Lofoten. Leknes has had 11 days over 20˚c this summer, or what has been called summer. Now Lofoten is a long ways north, and obviously not a tropical destination. But the islands have had a particularly bad summer this year, to the point where even my old neighbours are commenting how grey and windy it has been. Basically the the entire coast of Norway north of Trondheim has been in an endless cycle of wind, rain, and clouds; with only a few redeeming days here or there.

And even as I write this, Nordland and Troms-Finnmark have already received the first snowfall (across the border in Sweden as well), while southern Norway is potentially setting more heat records.

There is never a particular day when one can say summer has ended up here in the north, but I think we’ve now made our way into autumn.

Beyond sitting at the beach, we are also now two weeks into the northern lights season, and I have yet to see them so far this season even as several large solar storms have already hit the earth (though they were seen in east Lofoten last week). Cloudy and windy days turn into cloudy and windy nights, which is not good for aurora photography, unfortunately. Last year was a wet and grey autumn, so I hope there is not a repeat of the same. Otherwise I will just sit around on rainy nights dreaming of Spanish sunshine…