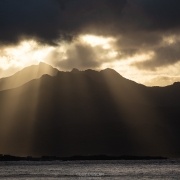 October has been off to a mostly cloudy and rainy start this year. But in-between the grey, there has been some nice moments of light. Autumn is usually a time of dynamic and interesting weather here on Lofoten, and yesterday was one of those days.

I spent the morning and afternoon shooting around Uttakleiv with my Swiss group from Amazing Views tours. The (nearly) new moon meant quite extreme tides, with the AM having a super low tide like I rarely seen, while mid afternoon, combined with large swell, saw waves sweeping high across the rocks. The same location but two completely different moods just due to the tide.

When it came time to move on, we had decided to go to Unstad for the sunset. However, as a little more of the western horizon came into view, I changed plans and decided heading to the Vikten area would likely produce better results. As we descended into Nappstraumen tunnel, I could already see a hint of the light show that was happening in the far distance over Moskenesøy. Turning towards Vikten, the light rays were shining over the mountains. One of those moments where one has to be quick, as the light might not last long. But it lasted long enough…