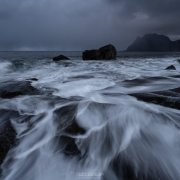 The autumn weather cycles of wind and rain seem to be in full effect over the last weeks with mostly turbulent weather sweeping across the islands. But this is a good thing, or, at least when you don’t have to be outside too much! I’ve just finished my 3rd and final photo workshop of the autumn, and each group had quite a variety of weather to keep them busy: wind, rain, rainbows, northern lights, fiery sunsets and sunrises, and everything in-between. Weather wise, autumn is defiantly the most dynamic time of year on Lofoten.

I had been at Uttakleiv earlier in the week at both low and high tides – a medium to low tide is generally required for the ‘eye of Uttakleiv’ to be visible, while high tide is typically more dynamic for the rest of the beach itself. With a nearly new moon at the time and with a large swell out of the north, but tides were quite extreme. At low tide, it was nearly impossible to head out onto the slippery, algae covered rocks, while at high tide, the waves were breaking very high up the shoreline, not allowing safe passage down to the lower rocks that usually work well as a foreground.

On my third visit the sea was a bit calmer while the sky itself remained stormy and turbulent, as a cold and icy wind blew out of the north. At first there had been bright clouds and a bit of blue sky in what is the background of this image. But it wasn’t long until the next wave of rain, which actually turned out to be stinging hai, was beginning to approach from the distance and darkening the landscape.

This time, the waves weren’t so large, so I could get into a better position on the beach, without too much worry of being swept out to sea. Although I did eventually end up with wet feet, despite the fact I was in rubber boots.

The large rock in the center of the image is always a compositional difficulty when shooting at Uttakleiv. In this case, I felt that just keeping it in the center of the image worked best, especially as the background mountains were softening up slightly as the hail passed in front of them. The water flows were difficult to find a nice balance, and I wish there was a little more action happening in the large black area on the right side of the frame, which feels a bit empty and distracting to me. But overall, I think Uttakleiv works best on stormy days like this…