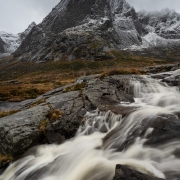 The first real dustings of autumn snow finally seem to be sticking around the peaks this week, dropping down to about 350m or so over Lofoten. Even the roads have begun to get icy in the last days, so it is good that I have my winter tires on already – The date for this in Nordland is from October 16.

The weather this day was mostly terrible, with a fully overcast sky and regularly passing rain/sleat/hail showers. I actually only left the house in mid afternoon because I was bored and didn’t feel like doing computer work, so with no plan, I just drove west. With a lot of rain in the last days, I could already see that the flat series of small waterfalls which flow over the slabby rocks on the western side of Kilanpollen were flowing higher than normal. So I pulled over in the small pullout and headed up the river.

This is a fairly reliable scene which usually produces a decent photo when the conditions are right – such as for this image – nothing special, but nice enough for a bleak, grey afternoon. Soon after I arrived, rain began to fall again, but I think this added with a bit of atmosphere as some clouds formed over Stortinden and darkened up the sky overall, which had otherwise been a bit on the bright side. The water was flowing strong enough that I didn’t need to use an ND filter to capture the flow. And when I did for some different compositions later on, the water was actually a little too soft, so I think this shorter shutter speed worked better to still retain a bit of the detail in the water.