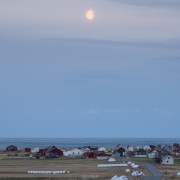 This is the last weekend of the year with (possible) sunlight on Lofoten as next week is the beginning of the polar night – the period of time when the sun no longer rises above the horizon. That is not to say that it is ‘night’ the entire time, but the nights are long after the twilight of the day begins to fade around 14:00.

Without direct sunlight, however, there is no proper blue sky ‘daylight.’ And while the southern horizon can glow brightly on clear days – as the sun is never too far away, for the northern side of Lofoten, the world is just a soft pastel glow.

For northern locations like Unstad, the village will already have been in the shadow of mountains for several weeks before the polar night officially begins. So for day to day life in the village, there is no real change from late November vs. early December. Or, perhaps only on a clear day where the sun might be shining on some of the surrounding mountains. The last visible sun at my house is October 20th, and it doesn’t return until February 19th. So unless I’m away from home, it can be long periods without sunlight for me. Almost makes me want to have a house on the southern side of Lofoten for the winters, or perhaps Spain!

Friday Photo #464 – House Below The Mountain