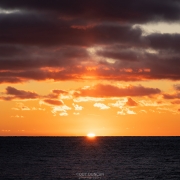 Photo: The last visible sun peaking over the southern horizon before the beginning of the polar night, Stamsund, Vestvågøy, Lofoten Islands, Norway. December 8, 2021. 11:56

The polar night has officially begun on Lofoten this week – the time of year where the sun no longer rises over the horizon. We won’t see the sun again until January 5th at the earliest. And I say earliest, because the return of the sun is as weather dependant as its departure. The latest ‘first sun’ for me has been January 18th.

Lofoten has experienced an early winter cold spell over the last two weeks. A big improvement to last years endless rain – though that will be back after the weekend, unfortunately. With the cold often comes clearer skies and horizon. However, I have actually been enjoying a semi-tropical sun down in Madeira for the last two weeks, so as I flew home to Lofoten on Wednesday, I figured I had already seen my last sun of the year.

But as a friend was driving me to Stamsund to pickup my van, I could seen the horizon glowing bright. Soon enough, a glimmer of sunlight poked above the horizon. I quickly cleared the snow from my van and headed to a spot on the road towards Steine. I didn’t have time for any sort of spectacular photo, and the mountains were glowing quite nicely. But it was simply enough to get an image of the sun (partially) above the horizon on my return to Lofoten. December 8th, this is now the latest I have seen the sun in the year.

Moving almost parallel to the horizon, the light didn’t last long before the sun sunk below the sea again, for its final time in 2021.