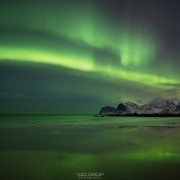 Wednesday’s clear skies and an incoming CME (coronal mass ejection) and prediction of G-1 solar storm is always an exciting forecast for Lofoten. More so after weeks of wind and mostly cloudy weather – though with northern lights to be found if one put in the time and effort. But a clear night sky is always something to look forward to, and seem like a somewhat rare treat in recent years.

With the aurora forecast in mind, I prepared and early dinner for myself at 17:00. When I next looked out the window into the still fading twilight around 17:30, I could see the first hints of green in the darker parts of the sky. Quickly getting dressed for the cold temperatures I was soon alone at Storsandnes beach shooting the aurora with still a little glow left on the horizon – a situation more common in early autumn or late winter, as normally, the northern lights are not out so early as this night.

Despite the early start to the evening, the aurora eventually began to fade and I headed home to warm up and wait to see what might happen later. But later never really came. There were a few small flareups from time to time, but not enough to take me from the warmth of my house. Looking at the aurora data, I could see that the solar energy had mostly faded. The solar storm would likely not arrive. And so I went to bed.

Waking up in the morning, I checked the solar data again. Now the storm had arrived! But not for Lofoten, unfortunately, as the day was already beginning to break. But those in Canada and Alaska were probably getting a nice show.

The same scenario receded itself yesterday (Thursday), with northern lights becoming visible as soon as the sky was sufficiently dark, yet fading away early. A few bigger flare ups occurred later in the evening, but by then, the sky over Lofoten was already heavily clouded, waiting the arrival of today’s blizzard like conditions…