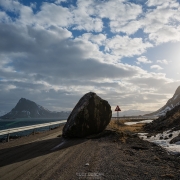 The unusually warm temperatures since the beginning of March have begun to thaw out the frozen mountains of winter. But as the sun comes out and the temperatures go up, ice and rocks come down. This particularly large one fell on my road on Wednesday morning – also cutting the internet cable to my village in the process. It’s big enough that they’re going to have to get out the heavy machinery to move it, or perhaps even blast it apart.

As of Thursday, the 815 was also closed near Valberg, on the southern side of Vestvågøy, due to another rock fall. And with heavy rain and wind due all weekend, more rocks will likely be falling from the mountains of Lofoten. To paraphrase one of the guys from the Norwegian road agency about the rockfall on Lofoten: the roads (of Lofoten) won’t be safe until Lofoten is as flat as Denmark…

With that in mind, the road signage on Lofoten, and Norway in general, is quite understated. You can see in this picture that quite appropriately placed rockfall sign just beyond the boulder. While this rock is on the bigger side, rocks large enough to smash through the roof of a car fall along this road on a monthly basis, more or less all year long.

Yet, it is just a few of these tiny signs to warn you of the quite substantial rockfall danger of Myrlandsviein. And these tiny road signs do little to stop the dozen or so tourists in vans and motorhomes camping on the the road each night throughout the summer. Perhaps if they knew the reality of what waits in the mountains above them, they would choose a safer spot to sleep for the night?

Considering how much emphasis Norway puts on road safety, it seems strange that consistent rockfall in a highly touristed area only receives a small notice.

Which brings me to my next point. From a Norwegian perspective, small signs like these do mean something! And yet, I think this translation is lost among the continental European visitors whose countries are often covered in an endless amount of signs that they become subconsciously ignored. If the road was dangerous, it should surely have more than a small sign, right? Not in Norway…