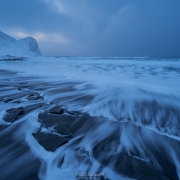 During winter cold spells or after heavy snow of the beaches the sand often freezes into a hard, sandy ice. During calm periods, this mostly just stays as a frozen layer on the beach, with the waves gently washing over the beach. But when the waves pick up during winter storms, they often ‘chip’ away at the frozen layer of sand, sometimes forming interesting shapes and lines along the tideline.

This was one of those days at Unstad beach. The waves were big, 4m+, and washing high up the beach. The incoming tide would slowly break away the frozen layer of sand, eventually creating a sharp line across the beach. The bigger waves would break off large chunks of the frozen ice-sand and wash them higher up the beach – and often crashing into my tripod legs, making that series of out of focus from the movement. But as the water flowed back out, there were moments when the tripod remained still and the images sharp.

Even with boot on, it was a wet foot afternoon, as it was better to stay as close to the action as possible. There were a few other compositions I made some attempts at, but those were even closer to the waves, and I spent most my time running back up the beach before I could make a decent composition.