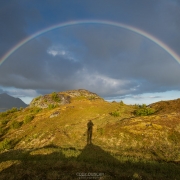 After last weeks brief visit of summer – hitting 20˚c on June 1st, the temperature took a significant drop over the weekend for several days of wind and rain, and a fresh dusting of snow down to about 700m. With the sun emerging again on Wednesday, I headed out to Haugheia for an evening walk and just to get the legs moving a bit after several days stuck here in front of the computer. The evening sun was shining in the mostly blue sky as I left home for the 10 minute drive to Haugheia.

As soon as I crossed the tunnel to Vestvågøy I noticed a bit of rain begin to hit my windshield. Hmm, that wasn’t supposed to be there. Soon, I noticed a fain rainbow being to appear over the leknes area, brighting over time as I neared the trailhead. As I got out of my van and put on my backpack a heavy summer rain was falling and a bright rainbow was circling the sky.

Haugheia wasn’t really the best location for such an occurrence, especially since it was nearly 20:00, the rainbow was in the southern part of the sky over the ugly industrial parts of Gravdal and Leknes harbor. So I just continued up the trail, trying to ignore the rainbow as I didn’t think I could get much of a shot anyhow. But as the minutes passed by, now probably 10 minutes since the rainbow first formed, it just stayed there. After a few minutes of hiking I got to a higher area where I finally thought it might at least be worth a quick snapshot.

There still wasn’t much, if any, of a foreground, but standing on a bit of a higher rock, I could at least take a semi-interesting shadow-selfie. Nothing special, but it would have been a shame to let such a nice rainbow pass without a single photo. So this was probably the best I could have managed in the situation. Had I known how long the rainbow was going to last, I probably would have driven to some other nearby location. Maybe next time.