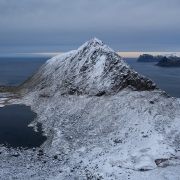 The first dusting of snow over Lofoten usually arrives sometime from late September to mid October. Though these first snows are never permanent and there can still be plenty of mild weather and rain as the calendar creeps towards the new year. But the first falling snow is always a reminder of the cold months ahead as the mountains slowly begin to freeze.

I often find hiking at this time of year somewhat tedious, as the autumn rain and mud begins to freeze and ice over on many of the hiking trails, making the mountains quite slippery! Light snow like in this image can be quite treacherous hiking over long sections of rocks as well. So in such conditions I will usually choose routes or areas which are less affected by the ice and snow – typically routes that are somewhat off trail, as the grasses and heather are safer and easier than muddy and rocky trails.

The light was flat and grey this day and usually in such weather I wouldn’t go hiking. And had there been no snow, I probably wouldn’t have. But as I was leaving for Scotland in a couple days, I wanted one last ‘autumn’ hike before I likely returned to a more wintery landscape in mid November.

Even with the flat light, the mix of snow and rocks added enough contrast to the scene for it to work somewhat decently. Had it been a full winter scene with more snow, then I don’t there there would have been enough contrast. And without snow, I think the image would also have been quite flat and dull with such a sky.