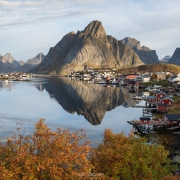 It felt like an early autumn this year in Lofoten and by now the October winds have stripped nearly all of the trees bare. But it also was a bright and colourful autumn while it lasted, with the birch trees much more vibrant than the previous couple years. And finally, after a mild finish to September and start to October, the first dusting of snow finally arrived last weekend.

It was also somewhat of a backwards autumn this year, at least in regards to September, which experienced fantastically mild and sunny weather with many days over 10˚c and cloudless night after cloudless night of dancing northern lights.

It was also a poor summer as well, so maybe it finally rained itself out by the time September arrived. August should normally average 55mm of rain. This year Lofoten received 190mm! Making this August the 3rd wettest month (in total precipitation) in the last year. Yet in the opposite direction, September should Normally receive 128mm or rain. This year only 50mm of rain fell. This actually makes this September the driest month in the last year.

So it was a terrible summer followed by a fantastic start of autumn this year on Lofoten. By now though, the ‘normal’ autumn weather seems to have taken hold as regular spells of rain and wind sweep across Lofoten and most of northern Norway. With the sun lower on the horizon each day, the islands now wait for winter’s arrival.