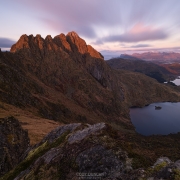 November has been fantastic this year! It turned out to be the 2nd driest month after September – and that’s only by 0.5mm of rain. But it looks like the weather if finally beginning to shift in the next days and Lofoten might finally receive its first proper snowfall of the year. So even with the polar night still a week-ish away, today’s clear sky will likely be my last time to see the sun for the year.

With the sun low on the horizon, if you actually want to hike in sunlight at this time of year you are mostly limited to mountains on the southern side of Lofoten. While higher peaks on the north side still also receive a bit of light, most of the way up/down will be in shade. I wanted as much sun as I could find today, so I headed to Nonstind – Ballstadheia which I knew would have all the sun Lofoten was to get.

Leaving home, I was initially worried about a quite a few low clouds hanging over many of the peaks of Vestvågøy and Flakstadøy. Yesterday and last night had also been forecast for clear sky, but in the cold and stillness, a low cloud formed over all the islands. It seems it took the arrival of a bit of wind to blow the clouds away and I was happy to see Skottind rising into the late morning twilight as I rounded the corner near Napp.

I was already partially up the mountain when the sun first peaked over the distant mountains of the mainland, at 10:46. A could wind was blowing from the south as the sun and I ascended in tandem, but the low low does little to warm you at this time of year.

Reaching the summit, clouds were blowing across the summit of Skottind. It’s already tripod light at noon these days, but I decided to add a 10 stop ND filter to capture the moving clouds, which looked slightly boring otherwise. I only brought my light hiking tripod, but finding a bit of a sheltered rock and keeping it fairly low, it seemed to hand 60 second exposures on the cold and windy summit of Nonstind better than expected.

I don’t know when/where I will see the sun again, but perhaps it will be here on Nonstind again in the first weeks of January when the sun returns to Lofoten again…