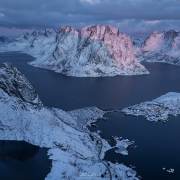 Late last week a pair of hikers required helicopter rescue from the summit of Reinebringen as they were unsure of their ability to descend from the summit. It was a cold and windy-ish day, but nothing too extreme by Lofoten standards, though the short days of early winter makes hiking a bit more risky simply due to the limited hours of light and reduced margin of error should a rescue be required; The Sea King helicopter is located in Bodø, while the alpine rescue team is located in Svolvær.

At a modest 448 meters high, it is easy to underestimate Reinebringen – and even more so since there is a stone stairway all the way to the top, making it perhaps Lofoten’s most popular hike in summer. Winter, however, is a different story.

Under usual winter conditions on Lofoten, Reinebringen is not a safe hike to attempt. And there are multiple signs at the base of the mountain warning so.

The upper 1/3rd of the mountain, below which much of the time hiking is spent, consists mostly of steep rocks slabs which release frequent avalanches, even well into the spring – when rockfall also becomes an increased danger. The steps themselves will be covered in snow in most places, if not entirely, especially on the upper portion of the mountain where wind blows deep snow into the gully where the steps are located. The wind also means the snow on the upper, steepest part of the mountain can often be hard and icy, much more so than lower down.

On Friday Photo #518’s post with an image taken from this same day, I wrote that the storms passing at the time meant Reinebringen would probably not be a safe hike for the rest of the winter. A warm-ish and rainy holiday season, followed by multiple days with a cold south-east wind blowing straight into the mountain has also added to the danger, as most of the upper mountain snow is probably quite icy and hard by now. Any new falling snow will likely be quite avalanche prone for the foreseeable future.

Beyond the avalanche risk of the mountain, the hike itself is quite steep and exposed. Once crossing into the upper half of the route, there are many places where one would not want to fall. And tragically, the mountain has taken two young lives in the last year alone: December 2021 and June 2022. Reinebringen’s 448 meters and popularity should not be underestimated.

So, with all of the above saying Reinebringen is a danger hike in winter and should be avoided, how am I posting a photo of a winter view from Reinebringen? Well, specific winter conditions and very little actual snow meant the hike was less risky than usual for winter. One benefit of living on Lofoten full time is that I can observe the changes in weather and the mountains. I knew this was the first snow of the winter and only a small amount had fallen, while the weather remained cold and stable after the storm had passed. So this was a rare opportunity for a winter visit to Reinebringen in conditions that were fairly predictable and safe.

And importantly, never be afraid to turn around. I had actually made a visit to Reinebringen in late November. There was no snow present, but Lofoten had been in a deep freeze of clear, windless days. A thin layer of frost was covering everything from sea to summit. I started up the steps, which felt fine. But around step 30-40 I turned around to test the feeling of the steps on decent. Even with spikes on my shoes, they were quite slippery and caution was needed. The thought of having to descend 2000 steps in such manner seemed like a difficult and dangerous task. And so I continued down the 30-40 steps and back to my van. A cappuccino at Bringen cafe was a better idea than Reinebringen on this day.