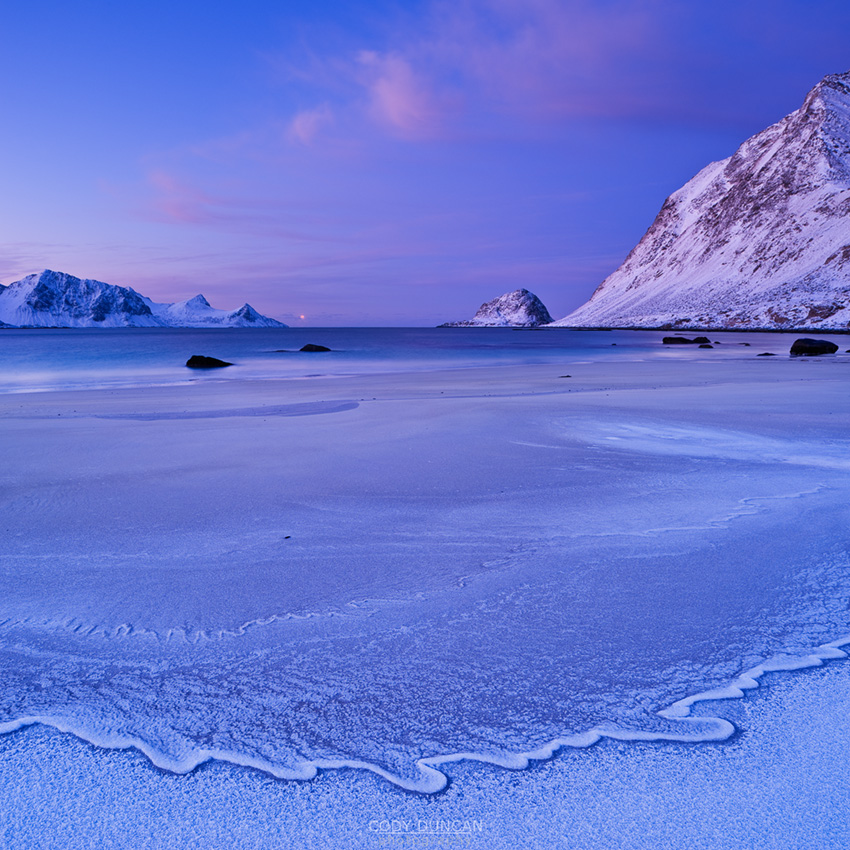 Having arrived on the islands the previous day, I spent the night sleeping in my rental car out by Utakleiv beach.  It was a stormy, uncomfortable night, and I worried that my car might get blown off the ice covered parking area and into the sea.  Fortunately, exhaustion from nearly 2 days of travel and little sleep meant I was actually shut my eyes for a while.

In the morning, I awoke to near silence, only the sound of gently crashing waves below me.  Leaving Utakleiv, I came upon this scene at Haukland Beach, just on the other side of the tunnel.  It had been cold for several days, and the beach lay littered with chunks of ice, frozen from the river that runs through the beach, and washed back ashore from the tide.  The nights wind seemed to have scoured away most of the snow from the beach, leaving only a thin, ice coat over the sand.  Overhead the sky glowed a brilliant pink as the sun was preparing to rise above the horizon for the first time in nearly a month.

I spent some time photographing the ice and then wandered closer to the shore where this scene caught my interest, where the high tide line frozen into the sand.  In the distance, the moon hung low over the sea while waves gently lapped the shoreline.  I stayed until my feet were so cold that I had to go back to the car and heat them up again.

This day ended up being one of my most photogenic days ever on the Lofoten Islands, and I there are many images that I still consider to be my favourites over 3 years later.  There will likely be more ‘Weekly Photo’ post with images from this day.

Technical info:  The final photo consist of 3 images, shifted vertically so I could get the 1:1 crop.  And for this scene especially, I think 1:1 works well.  With 2:3 format, it would appear too narrow if framed vertically, while horizontally I would have needed to shoot too wide not to cut off the top of the mountain.  I shot at f/16 and ISO 100 because I wanted a long(ish) exposure the flatten out the sea.  I also need quite some depth of field.