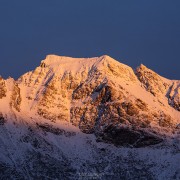 This week’s image is not something spectacular, but more to illustrate wonderful light that I was in the wrong place for.  Other than the light, the image is rather boring as I feel there is no focus or subject to the scene.  From the position I was at, and with quickly changing light, It was all I could do at the moment.

By late afternoon, it had become evident that there might be some nice light for sunset.  But how nice it became was truly unexpected by me, as it appeared there would be some clouds on the horizon, blocking out the final moments of light as is generally quite common on Lofoten.  But instead of fading, the light just kept growing and growing in intensity, lighting the cloudy sky in bright orange and pink while casting a brilliant light across the mountain peaks.

In mid to late winter, the sun sets over the ‘end’ of the islands in a southwestwardly direction.  This makes getting a direct view of the light with a scenic composition a sometimes challenging task.  It is already too west for anything around Reine, yet not high enough for any of the beaches on Vestvågøy.

Ideally, I would have positioned myself on top of Ryten or perhaps Offersøykammen, but it would have been impossible to know this at the time.