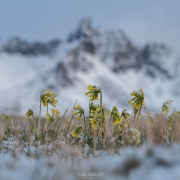 After the unusual warm at the end of April, the weather corrected itself back to normal patterns and once again snow was falling in the first days of may. The warmth though already sent the spring ‘greening’ of Lofoten into motion much earlier that normal. So even in the first days of May the fields had already begun to turn green and fill with flowers in some areas.

So when the fresh snow fell, I though it would be an interesting juxtaposition that we don’t often see here – snow and flowers. Usually it’s plenty of one or the other, on their own.

And while working on the update to the Seasons on Lofoten: Summer ebook, I was also planning on what I need for a possible Spring/Autumn edition – Though I’m still not wholly convinced there is enough demand for one. Even though website traffic here is so high these days I had to move servers and hosting the other week, ebook sales have been going down over the last year – I guess more access to free information that ever, even here, and more competition as well. But I am still out shooting when possible, trying to answer the question visually: what is spring on Lofoten?

I think I could have executed this image slightly better. While I wanted to isolate the flowers against the mountain, I think the mountain is perhaps a bit too abstract. I should have stopped down a little perhaps. On the bright side, the flowers and mountain are only a stone’s throw from my front door, so new attempts will be easy. Though I’m not sure if we’ll get much more snow this year – it already almost feels like summer here again…