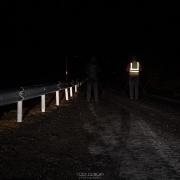 The weather continues to be mostly terrible here on Lofoten, but I’ve been out and about the last week attempting to shoot some missing images for the winter ebook update (coming by the end of the month hopefully!). I can already notice the roads getting a little busier with rental cars as and have bumped into a few tour groups as the first photographers of the winter season are beginning to arrive. And especially in this horrible weather and darkness, visibility is an issue!

Photographers like to dress in black. I don’t know why. Perhaps it’s merely that the shops only carry winter gear in dark colors, or maybe some nationalities dress different than other. But there are a lot of photography Ninja’s standing on the roads of Lofoten during winter.

If you’ve ever been here, you’ll notice nearly all the locals utilise some variety of reflective clothing when out on their evening walks – and even during the day at this time of year where it’s still quite dark. And trust me, as someone who drives here year round, it really makes a difference! I’m glad I can see the people when they’re walking.

In the last years, some of the rental car companies and rorbuer have begun placing hi-vis vests in the cars and cabins. And hopefully the trend continues. And I’ll admit that I myself am not always so good at this either, especially during tour season when I spend a lot of time near the roads.

For the winter ebook update I’m starting to write a little more about safety, especially on the roads, as I witness a lot of dangerous behaviour during the winter season. One of the sections will be about this, visibility.

So now imagine someone is photographing the northern lights in the middle of the road – which happens a lot! There’s a car coming, the passenger is pointing at the sky and telling the driver to hurry up as the lights are amazing. The driver is looking at the gps trying to see how far away the beach is. The photographer is focused on the northern lights and doesn’t really notice the car coming. Which person is the driver hopefully going to see standing in the middle of the road?

Visibility is safety for everyone here in winter…