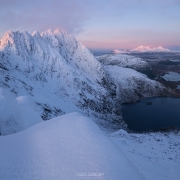 And just like that, after weeks of bad weather, the sun returned to Lofoten both on Saturday and Sunday. Though this didn’t last long and by Sunday night 30 m/s winds were shaking my house again as another low pressure system swept over the islands.

Waking up Saturday I could see blue sky overhead. I wasn’t sure where to go, my original idea had to been to head west and hike something on Flakstadøy, but as soon as I drove around the corner to Napp I could see a fair amount of clouds in that direction. I could also see there was a layer of cloud low on the southern horizon that was blocking the sun.

The weather was still the nicest it had been in weeks, and so with little expectations I headed for an easy hike up Ballstadheia as at least the mountains were covered in a nice layer of snow. Getting higher up the mountain I could see the cloud layer was thiner to the west and there might be a chance that the sun would get out of it before setting. And eventually it did.

The sun is still low on the horizon and the light soft, but I saw my shadow for the first time in 6 weeks! Actually I had to struggle with a few shots as the shadows of my tripod legs interrupted several compositions I was attempting. Nothing too complain too much about though!

I also wanted to show this winder image so you could see that while the mountains have snow, the low ground remains almost completely snow free in west Lofoten. It is such a fine balance of only a few degrees here between a complete white winter wonderland landscape or a brown and soggy one. Just 2-3 degrees cooler and we’d be skiing in epic powder with all the precipitation we’ve had in the last month.