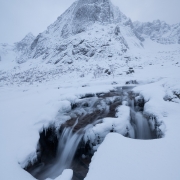 It has been a strange winter photo season this year on Lofoten. The commonly popular places in former years – Uttakleiv, Haukland, Unstad, Reinehalsen overlook – seemed almost deserted at times, while more random and isolated places seem to have grown in popularity. Case in point, Mølnelva.

This small cascading river flowing across some slabby rocky just next to the E10 never seemed to popular in previous years. This year however, while I was out trying to take a couple last images for the update of Seasons on Lofoten: Winter ebook, it seemed to always have a crowd of photographers each time I drove by. It wasn’t until late on some stormy afternoon that I finally found the location deserted.

Perhaps it is a bit of confirmation bias – I was specifically looking at the river, so always noticed it was busy, while I’ve driven by it 1000’s of times before without paying much attention. But this wouldn’t be the only ‘lesser known’ location I’ve seen quite busy on Lofoten this winter photo season.

Maybe people are getting a little tired of the classic views and looking for something new. Maybe there’s some social media popularity about a certain location that I haven’t known about – though this mostly seems isolated to the Instagrammer drone flyers, who love to copy a shot once its been ‘found.’ As though it is some new discovery and hasn’t been there forever.