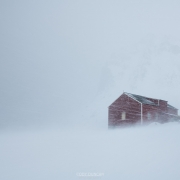 We bring in the spring equinox with the passing of another polar low pressure and gale force winds sweeping across Lofoten. But a bigger storm has already hit Norway and the rest of the world, something that will not pass so easily.

It was last Thursday evening that I walked into the restaurant in Hamn on Senja with my workshop group. The hotel manager immediately walked up to us and said we were all on quarantine (Well, I technically wasn’t since I haven’t been outside of Norway since last year), and the message was clear. The world had changed.

Information was difficult to find. Were they allowed to leave? Would they get fined for leaving? Did they have to sit for 14 days alone in their cabins? With every hour the situation changed. Soon Denmark closed its borders entirely, in which Norway soon followed, then the rest of Europe and the world.

With the workshop already ending on Sunday, the hotel situation in Tromsø was uncertain, we decided that they should rebook flights back to Switzerland for Saturday morning. And thus in the 5:00 morning darkness and blowing snow showers we began a silent journey towards the airport and everyone got on the flight out of Norway.

I had to remain in Tromsø another night. And after the initial panic of the first days, things seemed to have calmed a bit and other than Tromsø feeling like a ghost town and new regulations for entering stores and disinfecting hands, one might not have noticed that anything was happening.

But getting home was just one step of the journey. The real struggle will be surviving the next weeks and months. The travel industry has been completely decimated across Europe (and I’m sure the rest of the world). Within a week, Norway now has the highest unemployment since the Great Depression of the 1930’s and the Kroner’s value has fallen off a cliff. What the future will be or how long this will last, no one can say.

Best of luck to everyone out there. Hold fast!