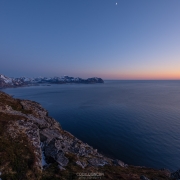 For the first time in a month there was a cloudless sky over Lofoten on Wednesday. While there have been some moments of sun here and there at times, never in the whole of April have we had a clear and calm day. So I decided to head up to the mountains for sunset.

Normally I love this time of year, with the ever lightening horizons each night. But this year, the night sky has been almost entirely cloudy, especially lower on the horizon. So I haven’t really been able to observe the change, since it all looks the same when cloudy. So with a clear sky it felt like a jump in time, suddenly it was so light!

The snow was too icy – and I brought my light crampons – for the mountain I wanted to climb, so I headed over to a section of ridge overlooking the coast above Vikten. The clear sky didn’t provide the most dramatic sunset, but it was nice to just sit and watch the sun sink into the calm sea, even if it was a little on the cold side. Normally I would have had the setting sun visible from my house for about two weeks now, but last night from the mountain was the first time I saw it happen this year.

I headed down a little before 23:00, making my journey through a mostly snow filled valley until a short steep descent to the lake and the muddy trail home. I brought my headlamp, it it remained in my backpack, probably the last time I will carry it until late August. Only a few more weeks until the sun is here for the summer and the sleepless nights begin…