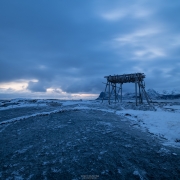 Winter on Lofoten. Well, no, this is mid May 2020. After several nice days of sunshine last weekend, the thermostat has dropped and snow showers have been falling across the Islands over the last days. And the long term forecast seems to show that we’ll have the same cold conditions for the next week or more. In the one year where’d I’d just want even 10˚ on a calm afternoon. Nope!

It is not that snow is unusual in May. It’s actually to be expected here in the north, which is why we can keep our winter tires on a little longer than the Oslo city people in the south – who have already been sitting in the sunshine for weeks. It just seems this year the weather has remained extra stormy, with few days of sunshine and even cooler temperatures overall. A day or two of snow is no problem in May when you have some sunny 10˚ degrees in between. But this year, the thermostat has been struggling even to reach 5˚ over the last month.

I could have pretended this was a winter photo. And by the look of it, I could have said it was taken any time between November and March and for most people it would seem out of place. But there are some clues which show it’s not a winter image. The first, and easiest to pick up is the time the photo was taken: 00:05, five minutes after midnight. Though the sky is mostly overcast, you can see the warm light glowing on the horizon. This would not happen in winter. The second clue, and really only for those who know the area, is that the glowing horizon is in the north. Definitely not something which happens in winter. In December, this image could have been taken facing south at noon for a similar result.

But I’m tired of snow. It’s been a long winter this year. Hopefully I can start posting some sunny images soon! I need to for myself…