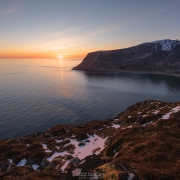 Last night was the first night the sun set after midnight for the year – and still a full month ahead of the summer solstice. Luckily this coincided with a perfect blue sky, perhaps even a bit boring photographically, but at least the horizon was clear. And so I headed up Helligberget – the Holy Mountain – above Unstad to see.

I should note that on Lofoten, the term ‘Midnight Sun’ is generally used to describe the period in which the sun is above the horizon 24 hours a day: i.e. never setting. Other locations might use the term a little more loosely to mean setting after midnight, but not necessary 24 hour sunlight, which only occurs north of the Arctic Circle.

However, since I was a few hundred meters up a mountain, I essentially transported myself into the future with my elevation. And so from my vantage point, the sun remained about 1/3 above the horizon at its lowest point around 01:00. Had I been down on the beach, the sun would have been fully below the horizon.

This photo is actually just a single frame from part of a time lapse I was shooting – which may or may not ever see the light of day, but I captured the full sequence of the sun drifting across the horizon from a little before it set until after it began to rise again – which is this image here, from just after 02:00. I didn’t use a photo from earlier in the night as it wasn’t as photogenic for a single still image – as at midnight the sun was in the far left of the frame, and felt somewhat out of balance to use here. The overall composition is also not the best, as capturing the full movement of the sun for the time lapse was my purpose, so my composition was constrained by the sun’s movement.

Today, the sun is shining again and it’s 13 degrees out! Feels like summer and time for a bbq – so I’ll watch the sun from by yard…