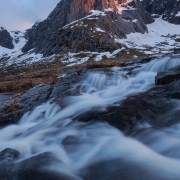 Photo: Stortind rising into the midnight sky above flowing waters of the spring snowmelt, Flakstadøy, Lofoten Islands, Norway. May 25, 2020. 23:29

Finally, after a seemingly never ending winter the thermometer broke into double digits again last weekend and gave us the hottest day of the year so far – 16˚C! Well, I’m sure for most of you reading this, that doesn’t sound like much, but for us here on Lofoten, this was only the 2nd time above 10˚C this year, the previous time being on January 2nd during a strange warm period. Otherwise, we’d have to go back to late October to find 2 more days above 10˚C.

Though unfortunately this was just a quick teaser of what’s hopefully to come. As the rest of the week since Tuesday has fallen back to a pattern of heavy grey skies and cool rain. But At least we had a few days to sit outside while not in a down jacket and remember what the warmth of the sun felt like – I don’t think my arms have seen sunlight since September…

Thus far in May, most of the precipitation arrived as snow. And while it has mostly since melted away from the coastal areas, the inland mountains still have significant snow coverage, even here in west Lofoten. Last year I was already hiking up snow free trails on moderately hight peaks by now. I might have to wait a little longer this year.

The mountain snow combined with the sun and warm temperatures quickly set the spring thaw into motion. All over Lofoten the often quiet little streams were flowing high and fast. Driving by this location on my way to somewhere else I noticed the river flowing across a section of rocks that for whatever reason I’ve never photographed before – I usually only visit the lower waterfalls here.

I first made a stop in the late afternoon and hiked a little ways up the valley to where the river was flowing across the flat, slabby rocks. But the sun was in the wrong part of the sky, so after a little while exploring and observing the conditions, I made the plan to come back later in the evening.

As the hours passed the winds picked up into quite some gusts out on the exposed coastal areas. Luckily, this valley was mostly sheltered, though at times the wind gusted strong enough to blow water across my lens. The sky was nearly completely cloudy, yet luckily enough there was a hole somewhere in the northern sky to allow a ray of light to shine across the upper half of Stordind – without that, I don’t think the image would have worked as well.