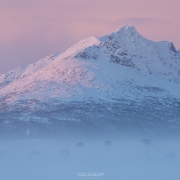 After a windy weekend, Monday arrived with near absolute stillness. Slow, almost ghost like snow showers were gently floating across the islands throughout the day, bringing the mountains in and out of the clouds from time to time.

My original plan had been to go skiing, as the wind was forecast to increase during the week, blowing away the already thin layer of snow western Lofoten has at the moment. But as I arrived at the parking lot, I noticed I managed to forget my ski boots at home! Doh!!!

I also had my cross-county ski gear in my van, so I eventually made my way to Leknes after photographing a bit in the Fredvang area. In the late afternoon I took a quick lap on the Leknes skiløypa, not wanting to miss out on any movement for the day. This turned out to be a good choice anyhow, as it kept me in town later than I otherwise would have been and so I found myself driving home a little before sunset.

In the low areas west of Leknes, I noticed some thin wisps of fog floating over the frozen landscape. Usually this is more common in autumn, but not so much in winter. A little further and I noticed on of the lakes had a thick layer of fog, with barely visible trees on the far shore. I was already content with the photos I had shot for the day, but this was potentially not something to miss, so I turned around and parked nearby the lake.

While this lake had been well frozen back in February, the weather has been mild for the last weeks, so I wasn’t sure what to expect. As I got to the edge, I could see that I was breaking through the ice and into boggy ground underneath. I should note, that I know this area, and that the edge of the lake is not deep. If it was another, deeper lake or with a steeper drop off at the shoreline, I would not have continued.

I could barely see the trees on the far side, looking like ghosts in the thick mist. I tried to get a little closer, but still mostly breaking through the ice and sinking into the boggy terrain with each step. Finally I took one step too far and sank past my knees, completely flooding my boots with water and soaking my pants. Ok, that is far enough, and I went slightly back onto shallower terrain.

Ideally, I would have liked to go out to the middle of the lake so the trees in the foreground would be a bit more visible, but I defiantly was not going to risk that! So I had to be content to remain close to the shore where it wasn’t deep. Even with my lower half soaking wet, I took photos for another 20 minutes or so, as the fog was drifting back on forth on occasion.