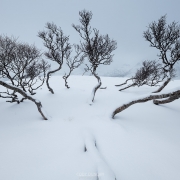 Winter is back! After a rainy finish to February the temperatures have finally dropped again and the typical March snow flurries have been blowing across the islands for the last few days. Today though, the wind finally calmed and so I headed out into the snowy weather to Haugheia to see if the snow added any character to the small copses of wind twisted birch trees that sit along the ridge. You might recognize these trees from Friday Photo #405, during autumn last year.

Conditions were slightly more difficult today than on a sunny autumn afternoon, but I kind of like the starkness of the winter look a bit better. I had been hoping for heavier snow flakes, and while the forecast showed rain, it was a thin, light snow that was falling as I reached the trees.

I spent a couple hours shooting various compositions. It is really a place one can get lost in, especially in the larger grove, which I find the chaos of to be slightly intimidating for my general preference of clean and simple compositions. Even this image, with plenty of negative space, is already feeling on the busy side for me, especially the thick cluster of branches on the left side.

Though as an easy 20 minute walk from the parking lot, I should put in a bit more effort to explore the area, as they are some of the cooler looking trees in the western half of Lofoten.

Tomorrow the first proper storm of the winter is forecast to hit Lofoten after what has been a pretty calm and sunny winter overall – much better than last year! So I don’t think I’ll be back then, but hopefully all the snow doesn’t get blown away!