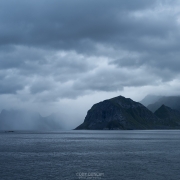 What started off looking like a promising summer in early June has mostly ended up as a wet and cool one. With only a few days here and there of sunshine between continuous weeks of low clouds and rain, even my neighbours have commented on how poor this summer has been thus far. A few weeks ago, tired of the rain, I even booked myself a last minute trip to Svalbard – where it was warmer on my arrival there than it was on Lofoten. Though the sun did eventually return for a few days while I was in the north – and with luck, Lofoten will hit 20˚c again this weekend.

But the overall appearance of this summer has been like this photo. Well, not even like this photo, as there is at least some nice drama in the clouds. This summer has just been flat grey a majority of the time. While I thought July was on the cool side, it ended up only being slightly below average. Perhaps it was the missing sun that made it feel cool. What was above average was the rain, nearly 3x wetter than normal – 116mm vs. normal July of 39mm.

August is often a month of transition from summer to autumn as the weather becomes more dramatic and the winds blow stronger. But as Lofoten has not really had a summer this year, who know what the next weeks will bring. Optimistically, we will have a warm and dry autumn – it cannot rain forever, right? However, with the border now open to northern Sweden, I’m personally setting my sights on the long, empty trails for my autumn wanderings.