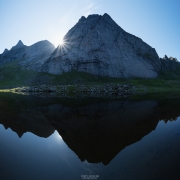 The weather finally cleared last weekend and I caught the ferry to Kirkefjord and hiked out to Horseid beach for a night of camping – only my 2nd night in a tent this summer. I was slightly fearful the beach was going to be crowded, as after extended periods of bad weather, the mountains are always extra full from all the people who have been patiently waiting around for the weather to improve. And I had seen what the ferry line looked like Friday morning and decided to wait an extra day. So it was a pleasant surprise to find that no one else of the several dozen people on the ferry exited at Kirkefjord, the rest remaining on the boat for Vindstad and the more popular Bunes beach.

The weather was hot and still, the sun shining brightly overhead for the hike over the low mountain pass between the village of Kirkefjord and the beach on the outside coast. Normally, I would hike along the (much drier) west side of the like pictured here. But in the perfect calm I could see the nice reflection of Breiflogtind and the sun soon to set behind it, so I put on my crocs and headed down the boggy trail along the east side of the lake as quickly as possible before the sun disappeared. I just made it.

As a 750 meter high wall of near vertical granite, Breiflogtind is one of the more impressive mountain faces on Lofoten. Even at 14mm, it was impossible to capture the scene in one image, and thus this image composed of 4 vertical images to capture the full scale of the scene. I also have some over versions with the lake shore in the foreground, but this introduces a bit too much distortion for my tastes, though maybe I will eventually process one of them as well. I like the clean look of this image anyhow.

The original plan had been to camp for 2 nights, but in the early morning hours I found myself having to go outside and guy out my tent as a strong gusting wind had arrived. It wasn’t in the forecast, but as with the weather on Lofoten, one never knows. And especially in narrow mountain valleys, the wind can bounce off the mountains and do other weird things. Walking back across the beach into the wind and sand blowing 100’s of meters into the sky felt like a Death Valley sand storm. Unfortunately, I should have been a little more patient, as that evening turned out to be the best sunset in months, followed by low grey clouds for the entirety of this week…