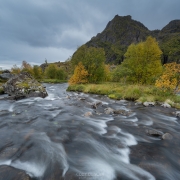 I woke up Monday morning to the first dusting of autumn snow across the higher peaks of Lofoten; A sure sign that we are now well into autumn. The snow seems early this year, which reinforced my observations that autumn itself seems to be a few weeks earlier than normal. Though this could also be a bit biased, as autumn was late to arrive last year. Either way, I think the wet summer, followed by an early cold spell, will hopefully lead to a colourful autumn this year on Lofoten. Just hope the storms stay away long enough!

With consistent rain through most of last week, on Sunday I headed west to Sørvågen to checkout the waterfalls and rivers of Studalselva which flow from Stuvdalsvatn. The autumn color was already quite mixed, with some trees already fully yellow/orange, while others have yet to turn at all. But I think the autumn color peak will be in late September this year – assuming weather conditions remain consistent – and not early October like most years.

The waterfalls were flowing nicely, but I ended up in the flatter part of the river first, with Tindstinden rising in the background. Even with my Wellies on and walking out into the river, I found it difficult to get a balance composition between the mountains in the background and the flowing river in the foreground. I just couldn’t (without wet feet) get to the right part of the river to balance out the scene properly. Especially because the mountain ridge to the right of Tindstind would become too strong and dominant if I showed to much of it.

Here are two versions of the scene in landscape and portrait format. I think the portrait format of this image works better in this case, as it avoids all the empty space of the upper left sky in the landscape image. I think I can spend a little more time working out the composition, but on this particular day, I was racing against the incoming rain, which eventually arrived and sent me back to my van.

With two Lofoten autumn workshops coming up in early October, I think I’ll have more time to spend in this location with the groups – just hoping the trees hold their color for another couple weeks!